Oh dear… I can’t believe that I forgot to announce my recent new releases on the blog – but I suppose better late than never! 😉 So in case you missed it, here are my new books which came out recently:

Another One Bites the Crust (Oxford Tearoom Mysteries ~ Book 7) 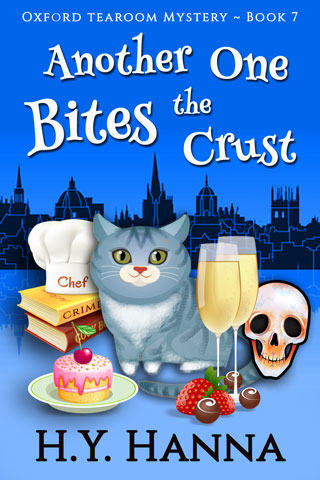 Champagne and ball gowns, fairy lights and music… Oxford summer balls are one of the highlights of the calendar and tearoom sleuth Gemma Rose is looking forward to taking a break and slipping into something gorgeous for the evening. But when the night ends with a celebrity chef murdered by his own whisk, Gemma finds herself plunged into a new mystery—and the nosy Old Biddies keen to help with the investigation!

But trouble is also brewing at her quaint Cotswolds tearoom: between fighting claims that she’s serving “fake” custard tarts and stopping her little tabby, Muesli, from being catnapped, Gemma has her hands full—and that’s before she has to fend off an amorous Italian. To top it all, her boyfriend Devlin’s mother is coming to visit and Gemma is anxious to make a good impression… although Mrs O’Connor isn’t quite what she expected!

With so much going on, it’s a recipe for disaster—but with a bit of help from her bossy mother, Gemma just might solve the case… and live to bake another day. 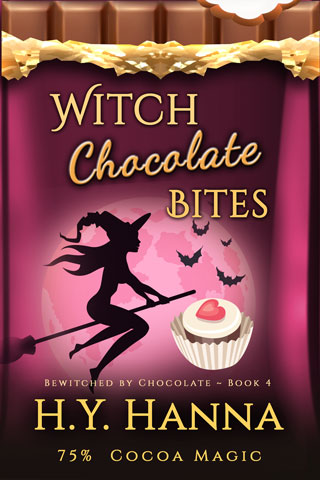 Magical chocolates, missing jewels and murder…
When novice witch Caitlyn Le Fey heads to an outdoor cinema festival at a beautiful Cotswolds manor, the last thing she expects is for the evening to end in murder. But when a dead man is found with fang marks in his neck and her old vampire uncle, Viktor, is arrested, Caitlyn must use all her newfound magic powers to clear his name.

Sleuthing isn’t simple, however, with so many strangers arriving at her grandmother’s enchanted chocolate shop: there’s the secretive village tenant with creepy Goth tastes, the inscrutable new butler at Huntingdon Manor–and a charming Frenchman keen to win Caitlyn’s heart. And that’s before she has to master the art of making the perfect chocolate soufflé or deal with a Levitation spell gone horribly wrong! Still, at least she has the help of a friendly English mastiff and her naughty kitten, Nibs, not to mention her sassy American cousin and all the village gossips!

Then a wild goose chase leads to an unexpected discovery and Caitlyn realises that she’s missed a clue under her nose all along. Can she solve the mystery–and maybe even discover Lord James Fitzroy’s real feelings for her? Or will she succumb to a vampire’s deadly bite?

** If you haven’t read this wickedly delicious series yet, now is a great time to start! Set in the beautiful Cotswolds, these fun mysteries feature lots of humour, quirky characters, a cute feline and a lovable hound… and a whodunnit with a magical twist!

I absolutely love these! I have purchased all of them! You just grab my interest immediately and never let it go. I stayed up till 5 AM to finish the tearoom mystery. I literally have thousands of books at my house, my own library, and bookshelves in every room but bath and dining room. These are my favorite. Finishing 4 pudding and a funeral now. Can’t wait for your new ones!!!!

Oh my goodness, thank you, Susan, for your lovely comment! You’ve really made my day! I feel so flattered and touched that you stayed up all night to finish one of my books. Thank you for your kind words. I hope you enjoy “Another One Bites the Crust” as much as the previous books in the series! 🙂
Best wishes,
Hsin-Yi

I love your books! They are so much fun & filled with intrigue, & at the same time….clean! Thank you so much! Please tell me there will be more of the Chocolate mysteries than just the 4 books! I will start on the Tearoom mysteries soon. I know I will enjoy that series also!

Hi Donna – thank you for your lovely comment! So sorry for my late reply – I only just saw this now. Yes, I’m currently working on Book 5 of my Bewitched by Chocolate Mysteries and I hope to release that in May… so not long now! I hope you’ll enjoy my Oxford Tearoom Mysteries as well. 🙂

Thanks again for getting in touch!