Q&A: "Do you plot your books from start to finish, and how?"

(** This is where I answer questions that readers send me!) 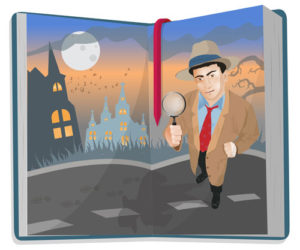 Oh, I’m definitely a plotter and not a pantser! (For those who aren’t familiar with the terms, writers tend to fall into 2 camps: Plotters and Pantsers, with the latter being those who “write by the seat of their pants” 😉 ) – I think it would be hard to write a good mystery without plotting, since you need to work backwards from the end and put in all the twists, false alibis and red herrings, as well as knowing what needs to be foreshadowed from the beginning.

I usually start with an idea – a “what if?” scenario that intrigues me. For example, in my latest new release (Muffins and Mourning Tea), the story was inspired by my own experiences at an Oxford May morning celebration: getting up at the crack of dawn and joining the crowds gathering around Magdalen Tower to listen to the choir sing as the sun rises over the horizon. 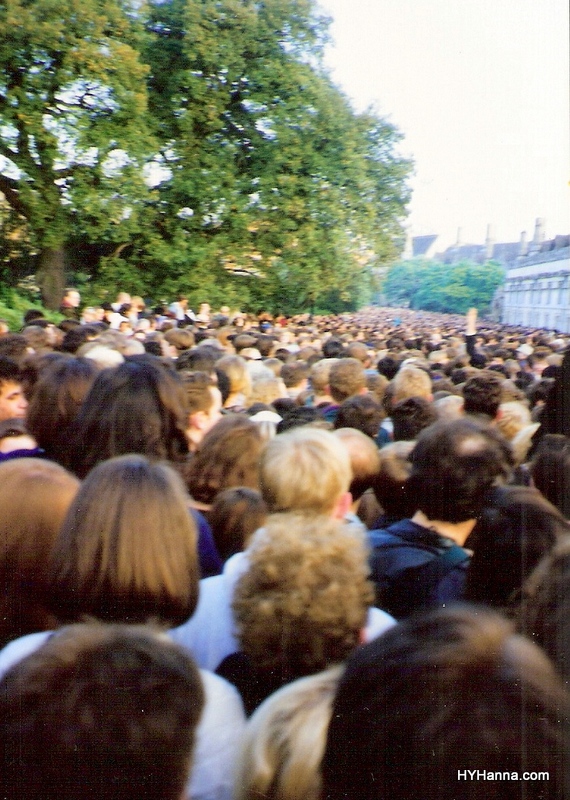 It was one of my most memorable experiences during my first year at Oxford and in particular, I remembered how crowded it was on the High Street as we walked down to the bridge beside the tower – the street was literally packed with heads stretching out as far as the eye could see (check out my photo on the left!).

I also remember how after the choir had finished and everyone cheered, Oxford students would jump off Magdalen Bridge into the River Cherwell below, and how exciting it was for the crowds watching them.

(I think the police have put a stop to this custom now and the bridge is now off-limits during May morning, following several injuries in the shallow river! But it was certainly still the tradition when I was a student at Oxford and for the purposes of my story – even though it’s set in the present day – I took a bit of creative licence! 😉 )

So I found myself wondering: what would happen if someone was stabbed in that crowd? Could you get away with murder in the middle of the May morning celebrations? And what if the murdered victim was on Magdalen Bridge and fell into the river – and everyone thought it was just a high-spirited student up to their usual pranks? And so began my story… which turned into the 5th book of the Oxford Tearoom Mysteries! 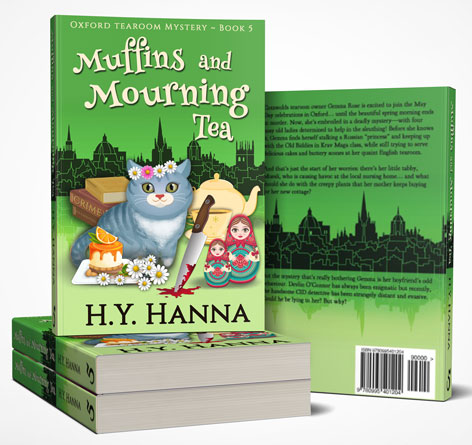 Once I have the premise, I usually decide on the murder victim and their background, as well as the suspects and their possible motives for killing him/her. 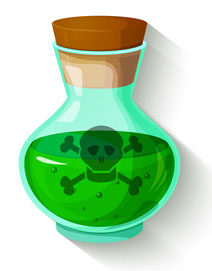 If it’s a poison murder, I do a lot of research into the best poison to use, what the symptoms (clues!) are and how the various suspects could have got hold of it. And then I go through setting up (false!) alibis and red herrings. The key to remember is that everyone often has something to hide – but not always because they committed a murder, and this is what leads to the red herrings.

Now that I’ve got all the main “players” in the mystery sorted, I start plotting the sequence of events in the story. I plot using scraps of paper stuck on a wall or a door using Blu tack. 😉 Each scrap of paper has a couple of lines scribbled on it, which represents a scene or a “beat” of the story – something which moves the story forward – and I arrange them on a timeline, so I can see the structure of the whole story and where each scene falls in the overall arc. This way, I can also move a scene around – insert it earlier or move it to later –  if it helps the story flow better, or even add in extra scenes (scraps of paper). 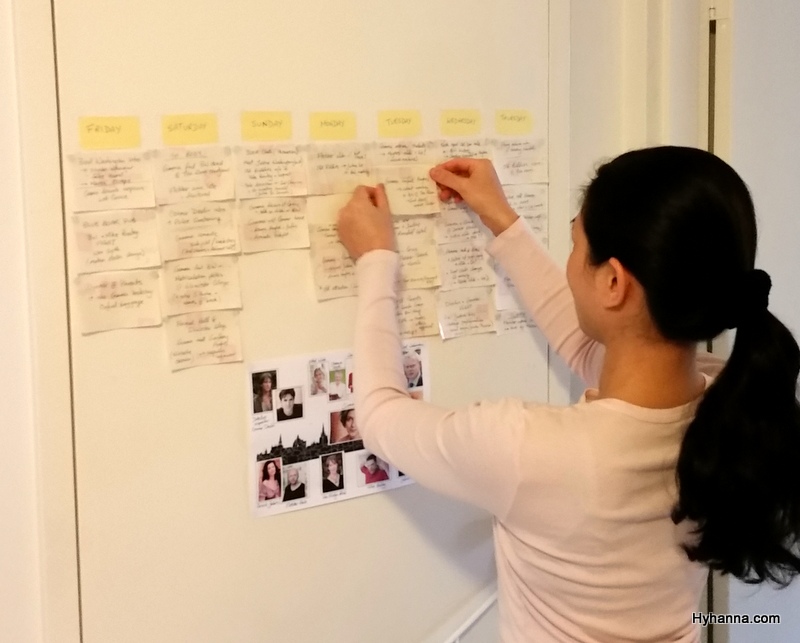 I also colour-code the main recurring characters in the series ( especially the fan favourites like Muesli and the Old Biddies! 😉 )- to try and make sure that they appear in scenes throughout the book, so that there aren’t long sections in the story without them. And then I weave in the subplots and background stories for the characters (such as Gemma and Devlin’s romance, Evelyn Rose’s match-making, the tearoom growing as a business…) so that they integrate seamlessly with and enhance the main mystery plot. 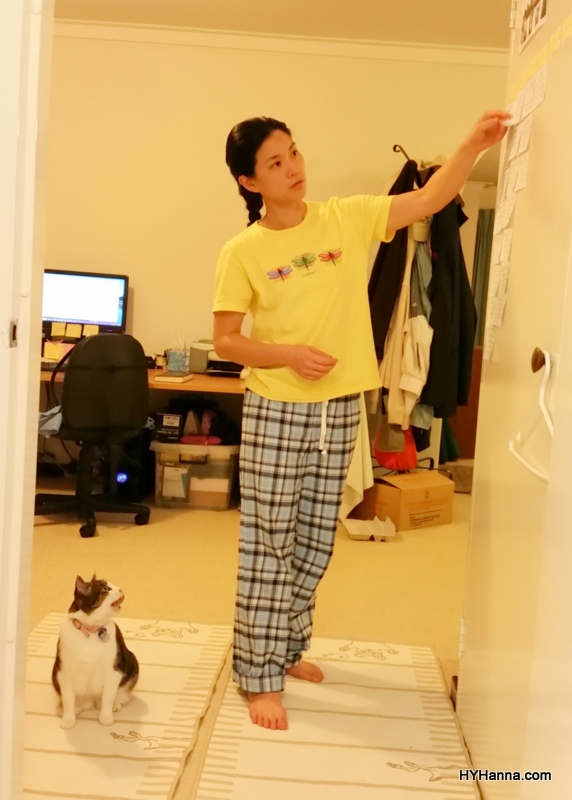 But before you think I’m a total control freak (okay, you wouldn’t be far wrong 😉 ) – I must say that I don’t outline the scenes in detail. I plan the general gist of what happens (eg. “Gemma & Old Biddies snooping in college – get caught by Devlin”) but I often don’t know how it will happen until I’m actually writing the scene… and then I just go where my imagination takes me. Often, I can see the scenes playing out in my mind’s eye or hear the characters talking in my head and I simply write down what I see/hear.

Like all best-laid plans, though, my plots often go awry! But that’s OK – they’re just a scaffold to hang the story elements on and I can always tweak and change them to suit. They’re like a map of the general route to get to a destination – but it doesn’t mean you can’t take a scenic detour! 😉

Oh – and of course, Muesli is always on hand to give me a “helping paw” with plotting a new novel. Like all cats, she can be very opinionated –  as you can see in the photo!

Hi, Your last Tea Room mystery was great!!!!
I loved the “old biddies” as always, but I think I laughed at their antics more in this book.
I can actually picture how they would be in my mind. Very funny. It was a great book and I can’t wait to read your next installment. I hope you enjoy your vacation.

Thank you, Cindi! So happy to hear that you enjoyed the new book – and yes, I think the Old Biddies are getting worse and worse – haha! You know when characters in a book take on a life of their own? Even I don’t know what they’re likely to get up to next when I’m writing – the scenes sort of write themselves sometimes… which makes it very enjoyable for me too. 🙂

It was great to read about your writing and planning process and how the fifth book was inspired by a “what if” from your own student days. I imagine that books like mysteries work well with planning as it would be a lot harder tow rite all the clues, red herrings etc otherwise.
I love how you write the mysteries with enough clues that readers can figure it out themselves, but also with enough red herrings to keep me guessing for a long time. I solved the mystery in the fifth book just seconds before Gemma did.

Thanks, Lola – glad you found it interesting! 🙂 And I’m so happy that you’re finding my mysteries a challenge and enjoying the twists & red herrings – that’s exactly what I hoped for so it’s wonderful to hear!

I would think you’d have to work from end to beginning. It’s too easy to lose track of characters, subplots and so if trying to write the other way. By the way, Muesli is just making sure you don’t forget her in your book timeline! After all, she is an important character in the book! lol

Yes, you’re so right, Debbie – although I know some writers are very good at just “pantsing” their way through a story and just writing and seeing where it takes them, often with no idea of the ending or sometimes even who the murderer is! I admire that – I couldn’t do it! 😉

Haha – and yes, Muesli is very fussy about how she is featured in my stories! You know how opinionated cats can be! 😉

Who makes your covers

I make my own covers 🙂

I am an unpublished writer. My experience is with the Pantsing process. Very interested in your plotting process. When friends ask me about plot and how a book comes together I tell them that Writing for me is moving into a new neighborhood and all the neighbors come to tell me their version of the same event. I write what they tell me.Once I’ve heard from all of them I say good-bye and move to another place.. The process seems endless but works.

Thank you for adding to my life.When I read your books, it a good day.

So the sticky notes on the white board are chapter numbers? Or major events?

No, they are major “beats” or scenes in the book which move the story forward. An action & reaction. Something which happens, which changes things – like new information learned or action taken by a character or even just a character revelation.

Sometimes, especially in humorous books like mine, they can even be what I call “decompression” scenes – like a funny scene after a tense, serious, intense scene. They don’t necessarily have to advance the story, just flavour it. A lighter, warm scene after something dark. Or vice versa: a suddenly darker scene after a light one, to remind the reader of the stakes.
Just a change of pace. I feel that you need those to keep the story balanced and make the book an enjoyable experience for the reader.

I don’t plot by chapters – although most of my chapters do involve a major scene or beat of the story. But not always – sometimes if it’s a long scene, I will split it into two chapters.