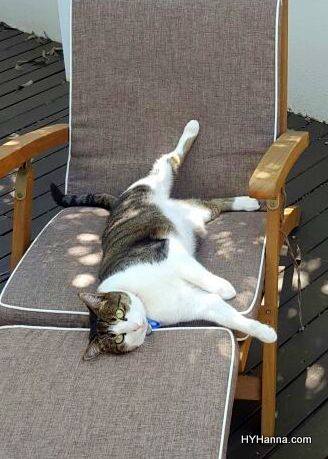 Here’s a picture our house-sitter sent us while we were away – as you can see, Muesli was really suffering and pining for us… NOT! Haha!

Many of you have been sending me messages, asking how Muesli coped during our recent trip overseas. Well, I’m delighted to be able to tell you that the little minx had a wonderful time!

We had a house-sitter come to look after her during that time and from the regular updates we were getting via text & email, it seemed like Muesli was being thoroughly spoilt and had the house-sitter wrapped around her little paw. 😉

In fact, our house-sitter had never had a cat of her own before and she was so smitten with Muesli and enjoyed living with a cat so much, that after we came back, she immediately went out and adopted a rescue kitten herself!

So a few weeks later, we invited her over for a thank you dinner and she brought her new kitten over to meet us , plus have a playdate with Muesli. 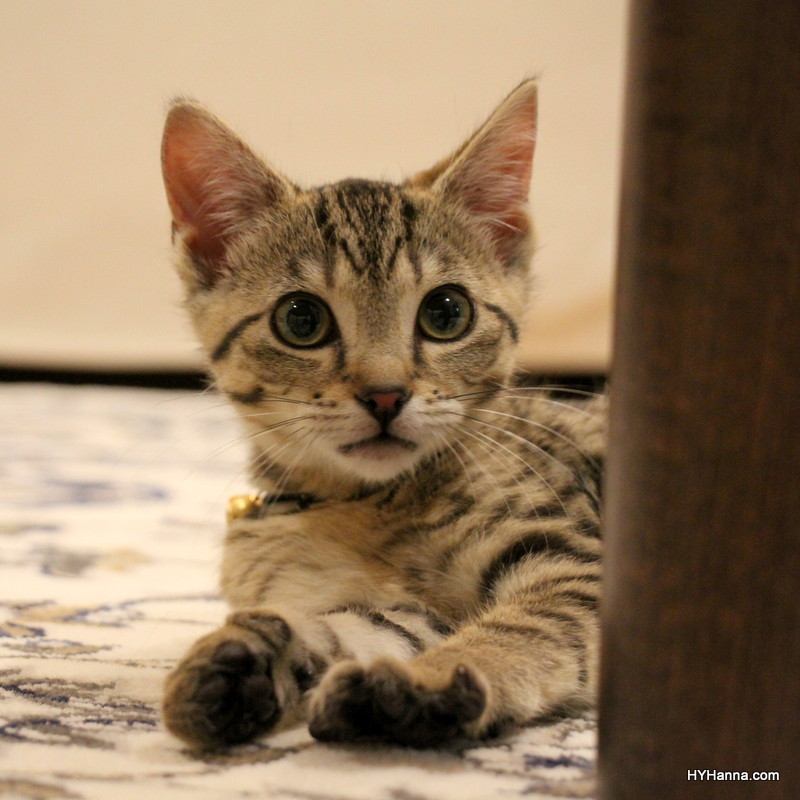 We were very excited to meet her new kitten and we had all these (naive!!) visions of the two of them – Muesli & Nala – curled up sweetly together or playing together…

Muesli was NOT AMUSED to find another kitty in her house. In fact, she took one look at the kitten, puffed up to twice her normal size, and started growling & hissing at the poor little thing! 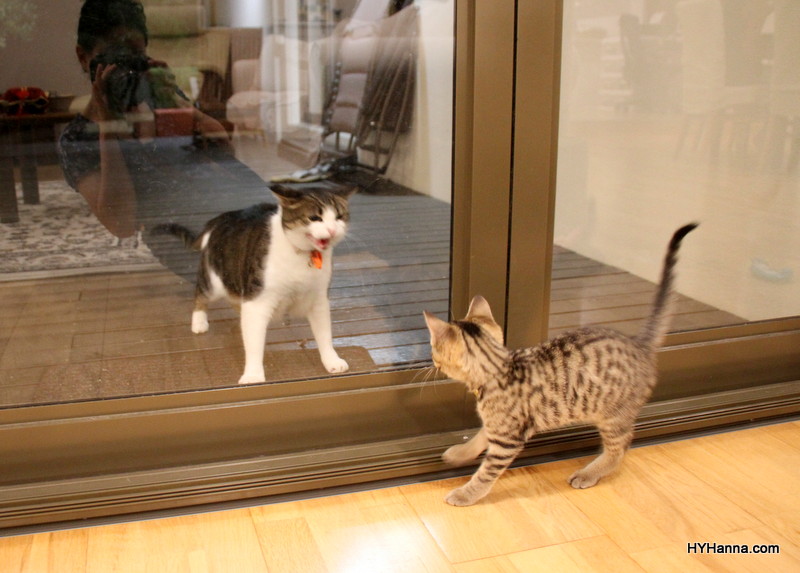 Oh dear! We tried to get them to be friends – the kitten was quite keen but Muesli was having none of it! She kept following Nala around, giving her the Evil Eye and growling at her. Then finally, when it was obvious that the kitten was not going away,  she stalked off in a huff to sulk in the garden.

We were very embarrassed by Muesli’s anti-social behaviour – although perhaps it’s only to be expected, since Muesli is 6yrs old now and an “adult” and quite protective of her territory. She was a lot friendlier to other cats when she was younger.

We’d sometimes wondered whether we should get a second kitten but after seeing Muesli’s tempter tantrum with Nala, I think we’re giving up on that idea!!

Anyway, while Muesli sulked in the garden, the rest of us still had a great time – especially the kitten! She was such a confident little thing, scampering around and exploring everywhere, climbing up over everything and exploring every hole she could get into. Whew! I’d forgotten what kittens are like – what a whirlwind of energy!

I managed to get some photos of Nala (although it was quite difficult to get clear ones since she hardly stayed still for longer than a second!) and I thought I’d share them since I know many of you are cat lovers. 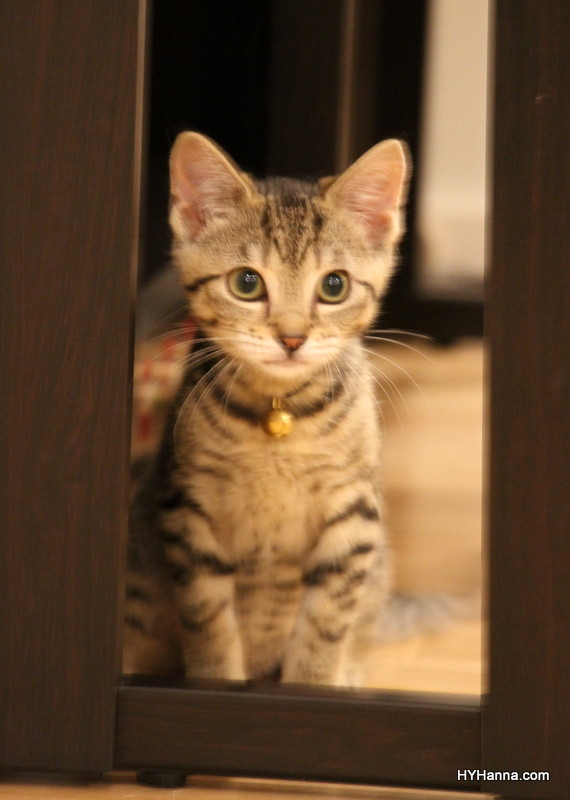 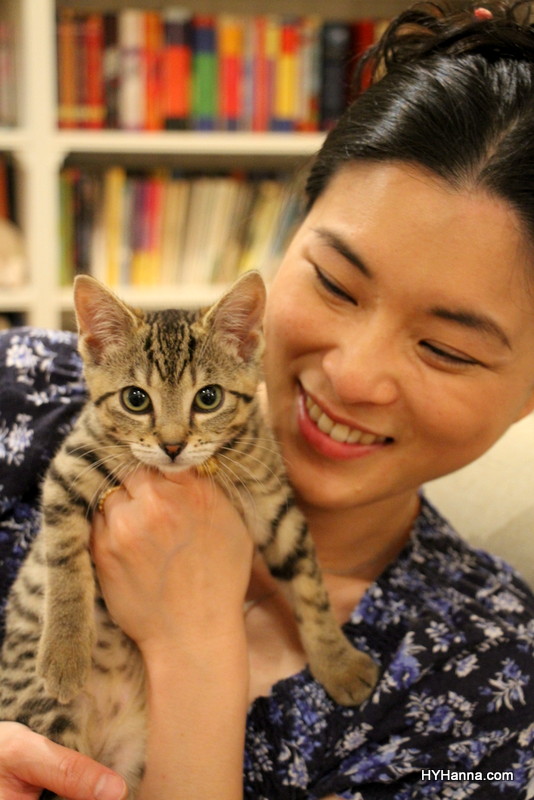 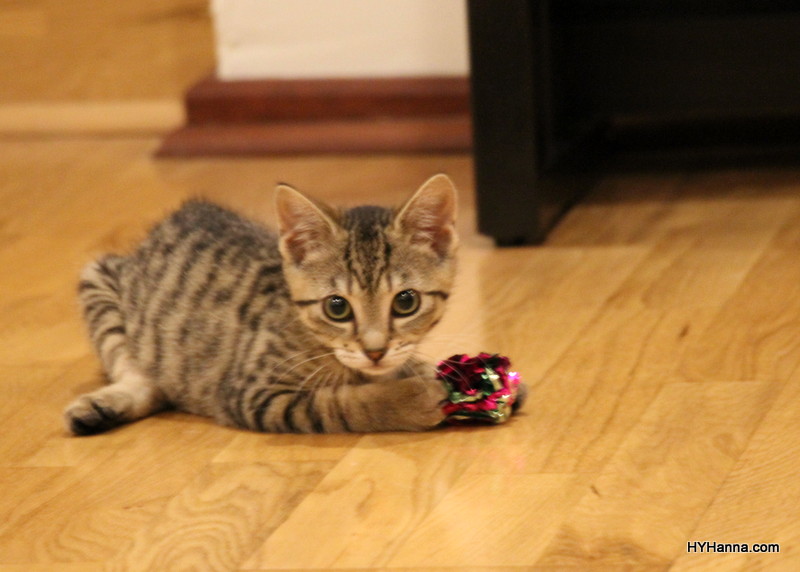 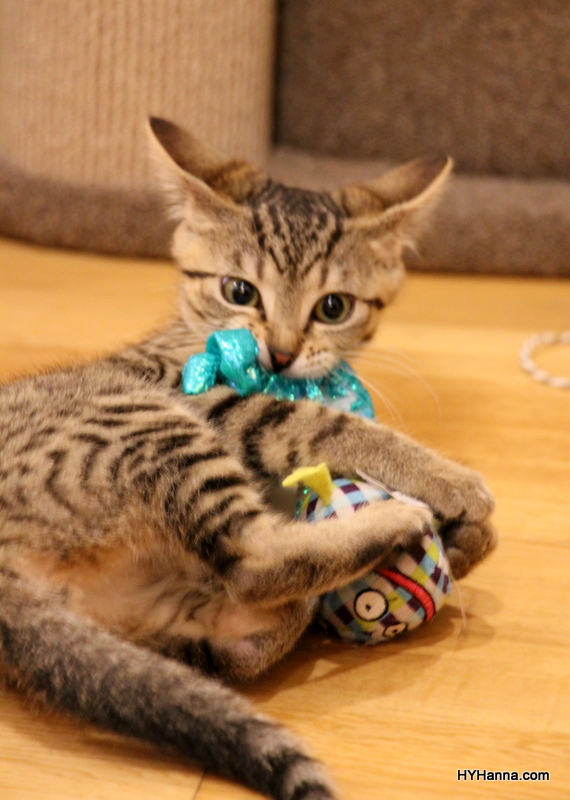 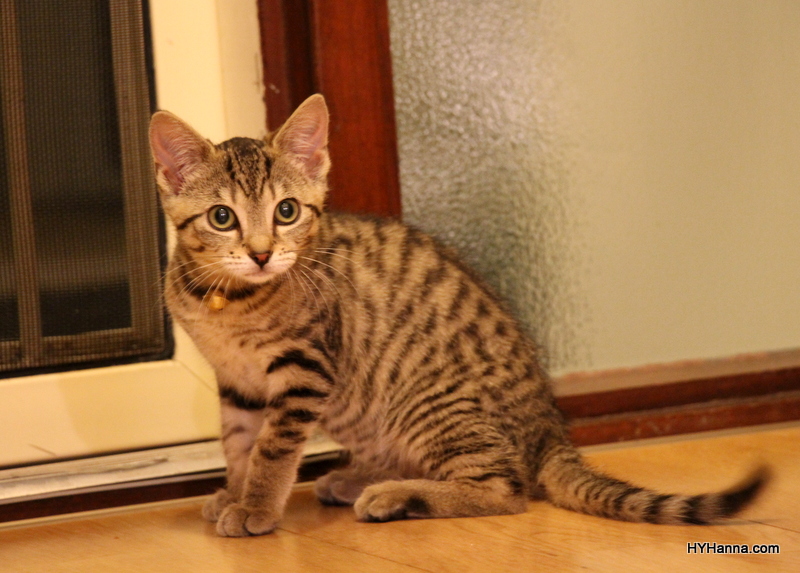 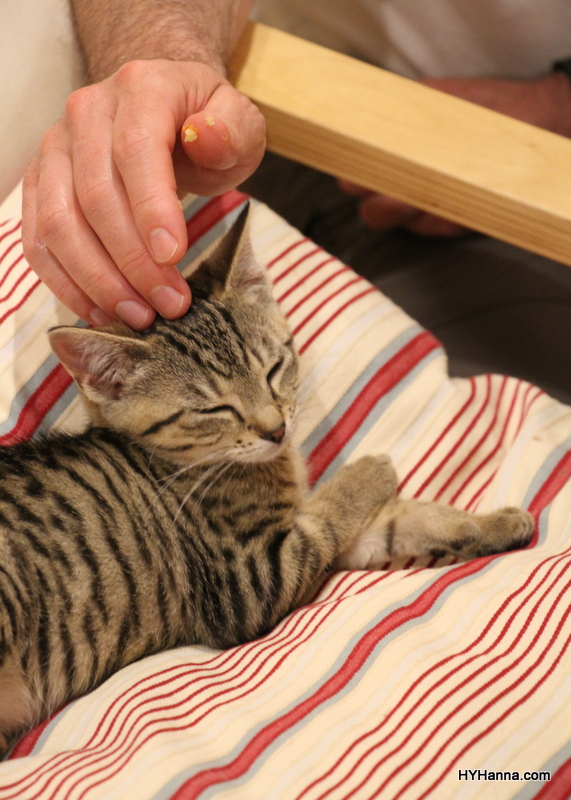 At last! Tired kitten finally settles down for a nap… and her close-up! 😉 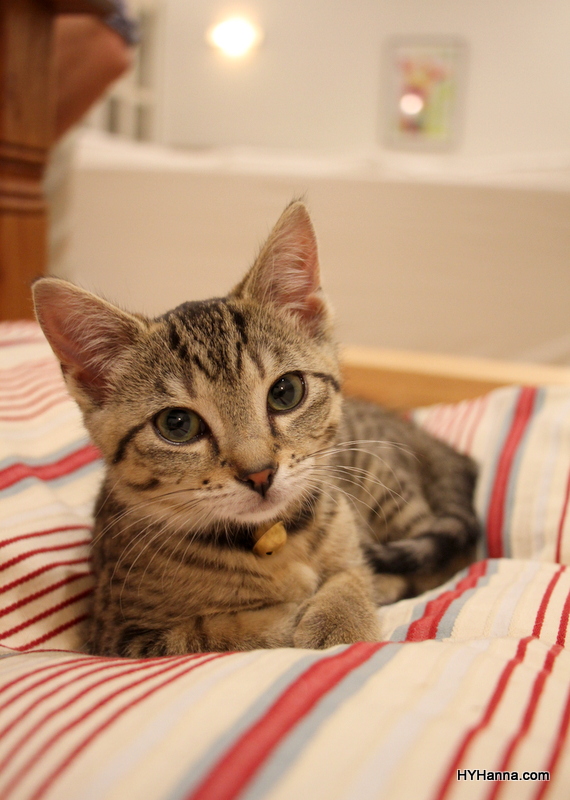 ps. don’t worry – Muesli came back in the house as soon as the kitten left. She stalked around in a bad mood for the next two days, then seemed to finally forget about it and was back to her normal self. I don’t think we dare invite Nala back for another playdate though – haha! 😀

Nala is adorable. Poor Muesli. Our Kit-Kat, who’s now 16, reacts the same way to other feline and canine visitors. I think he’s just too old to be bothered now.

Yes, you’re right – I think it’s probably like us humans too. We get a lot less tolerant as we get older – hee! hee!

Aww Nala looks so cute! Although I guess it’s understandable Muesli wasn’t too happy to find another cat in her territory. That is nice timing you got a picture of Muesli in puffed up mode when she noticed the kitten.

Haha! yes, that was a lucky shot! I didn’t actually get the first time she puffed up – that was in the house – but we were too busy hovering around watching, worried that she might hurt the little kitten. Then Muesli took herself off to the garden to sulk… but she came back to the window after a few hours to look in the house (probably to check if the kitten was still around!) and she puffed up again when she saw that Nala was still there, through the window. I was quicker with the camera that time! 🙂

Oh wow what a gorgeous little kitten, just felt like taking her out of my laptop and placing her on my lap! What excellent photos not at all blurred. Poor Muesli, well it is HER house and you cannot blame her for not playing with Nala!

Thank you, Vera – haha, yes, I think if Muesli could talk, she would have stalked around yelling, “This is MY house! Why is there another stinky kitty in here??”

Glad you liked the pictures. I think I took dozens in order to come up with those few that weren’t too blurred!

Ha! That was funny! And adorable. I have 3. The first two are litter mates so they have always been around each other. It took a couple of days for Baloo to get used to new kitten. But initially usher was NOT AMUSED!!! Mowgli was from start the start like, “What’s up? Welcome home!” Cats, I love them. I grew up in a housentjaybhas alwwats been made up of dog lovers. No cats, now I have 3. And 3 dogs. I love it. My aunt (the cats) not so much. She loves the dogs though. Oh well, they are awesome animals.

Love the names of your cats!! I guess you must be a Jungle Book fan, huh? 🙂 Me too!

That’s great that your cats got used to the new kitten eventually. I’m sure if we did get a kitten, Muesli would probably come round – but it was probably a bit much to ask her to welcome a guest kitty with open paws – haha!

Really beautiful kitties. I have had several cats. Sometimes one would be okay with a new cat, sometimes not.

That’s so interesting, Karen Anne – yes, I guess they all have their individual personalities! 🙂

I have three kitties and one dog all rescues,my big black and white Maine coon always makes his point within the first fifteen minutes to new comers even dogs get a bloody nose.He is the master and it does not take long then for every one to know their,place,then,all is fine.I think you should keep trying with Nola. What beautiful markings the litte one has.
p.s. Love your newsletters and pictures. Marjorie

Haha – your Maine Coon sounds like a real character and the master of your house! 🙂 You made me laugh with that image of him giving a new dog a bloody nose to show him who’s boss!

Thank you – so pleased you’re enjoying the newsletters and blog posts!

That is a beautiful kitten. She reminds me of a wonderful cat we had and lost to old age a few years ago. I remember him every day! He was also a rescue.

Sorry to hear about your cat, Linda! I can just imagine how you must miss him. We lost our first cat, Lemon, when she was only 5 yrs old and we still think of her constantly. She was a real personality!! 😉

Nala is beautiful! Unfortunately cats aren’t the pack animals that dogs are. Funny Muesli could feel completely comfortable with a Great Dane, but not a kitten! BOL!!

I know, it’s ironic, isn’t it?! 😉 People always used to ask us how our cats coped with a giant dog in the house but really, the cats have always ruled the roost – both Lemon before and Muesli after – and had no problems bossing Honey everywhere! 😀 They really are proof that “size doesn’t matter”!

Cats aren’t like dogs, you usually can’t bring other animals into the house once they’ve established their territory. We just lost our cat, Sheba, last October. She was 19 years old and hated any dog or cat except her brother, since she was a kitten. Obviously, that meant Sheba was the Queen of our house, and is definitely missed, however, our lifestyle is such now, that it is easier without a pet. I can’t even imagine a “cat play date” with Sheba! lol

Yes, you’re right – cats really aren’t like dogs at all! We were probably being very naive. Although I have seen other people with sociable cats (even when adult) and heard them tell stories of how friendly their cats were to others – which is why I was hopeful! And also because Nala was a kitten, I thought Muesli might have been more accepting – I wouldn’t have dared try a playdate with an adult cat! 😀

Nala looks so sweet!
Perhaps you can have a try and give an older shelter cat some good last years, which won’t be a threat, just sitting/lying there.

Perhaps you can have a try to give an older shelter cat some good last years. It wouldn’t be such a threat as a vivid young kitten.

Haha – oh no, we tried that once already with our first cat, Lemon, back in NZ and it was even MORE of a disaster!! We adopted an older rescue cat and tried to follow all the advice from cat behaviourists about introducing them, etc – but they kept fighting and both were really stressed out and it was cruel. Our first cat, Lemon, ended up nearly living outside all the time because she was so upset with the new cat and we felt our first loyalty was to her, so in the end – after 6+ months of trying – we had to take the rescue cat back to the shelter to find another home – which made us feel really sick and awful, like we’d betrayed her and had given up on her. It was a terrible experience. 🙁

The cat advice books actually recommend getting a kitten rather than an older/adult cat if you’re adopting a new one, because a kitten is more likely to submit to & respect the established cat and therefore be LESS of a threat. So if we ever did really consider getting another cat, we would still definitely get a kitten. But I think it would be easier to adopt a puppy – haha! Which we will be doing in due course but I’m still not ready to get another dog yet because I’m working so hard now that I just wouldn’t have time to devote to a puppy properly.

Oh, what a shame, Janet – that must be so frustrating for you! I guess you’ll have to enjoy cat ownership vicariously through the books you read! 🙂