Wow, a lovely reader made my traditional English scone recipe from A SCONE TO DIE FOR, complete with gorgeous photos & video, and featured the book on her blog! And considering that she’s an avid baker and thought my scones as good as the ones she’s had in British tearooms, I feel very flattered 🙂 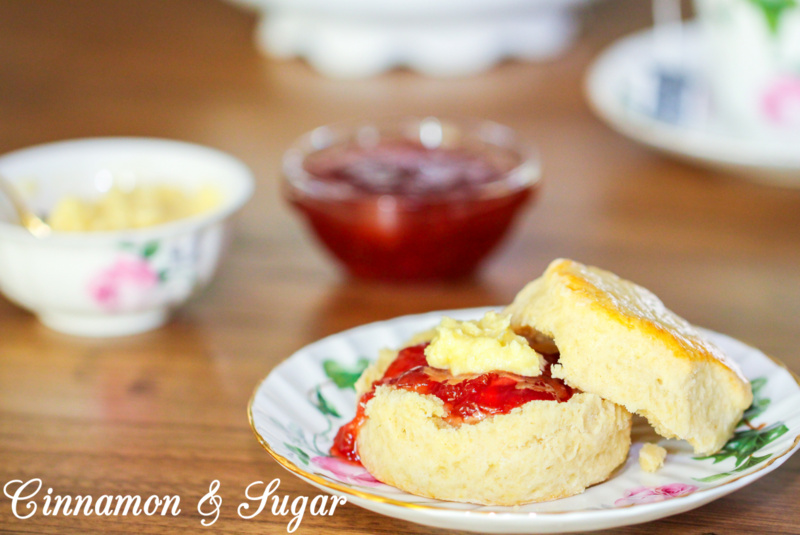 * A special thank you to Kim at Cinnamon and Sugar and a Little Bit of Murder for allowing me to share her beautiful photos and video.

“When I saw the book, A SCONE TO DIE FOR by H.Y. Hanna, I immediately knew I wanted to be a part of the review team. An adorable cover, a clever title, a great story and a recipe for Traditional English Scones…oh yum! 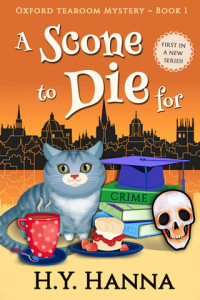 I enjoyed A SCONE TO DIE FOR for so many reasons. The author, H.Y. Hanna, is British and her writing takes on the charming quaintness of an England village. She uses a variety of English colloquialisms, that while unusual to Americans, lends an authenticity to the story. Fortunately for those of us who don’t quite know what some of the words mean, H.Y. Hanna has included a Glossary of British Terms at the back of the book, which is entertaining reading on its own.

I enjoyed so many of the characters featured in the mystery: the four “old biddies” who hang out in her tearoom and want to help solve the crime; Gemma’s mother, who can’t quite understand her daughter but steps up when she’s needed; to the cat “Muesli”, who steals Gemma’s heart…and I hear has a more prominent role in Book 2 of the Oxford Tearoom Mysteries. It’s called “Tea with Milk and Murder” and is available now as well. The plot kept me guessing the entire time, while the ending was a complete surprise.

Now back to those Traditional English Scones…. Years ago my husband and I spent three weeks driving through Great Britain, spending the majority of our time in villages similar to Meadowford-on-Smythe and in numerous tearooms. My most favorite part of the day was late afternoon when we could relax in whatever tearoom we stumbled across and nibble on delectable scones and sip steaming hot tea.

I made H.Y. Hanna’s recipe at the back of the book for Traditional English Scones and thought they were amazing! I shared some with friends who had spent considerable time in England and received two thumbs up from them as well! I also made some Devonshire Cream, aka Clotted Cream, which is traditionally served with scones…all it is is heavy cream with some patience, which then produces an ethereal accompaniment to scones and jam! I’ve also included a video tutorial on how to make these delectable scones… they may seem intimidating, but aren’t that difficult at all.”

(Recipe from the back of A SCONE TO DIE FOR: )

Scones have a long history, originating in Scotland in the 16th Century, and are said to have taken their name from the Stone of Destiny where Scottish kings were once crowned. They are a “quick bread”, a bit similar to Southern “biscuits” in the United States. the original version was triangular-shaped, made with oats and griddle-baked rather than baked in the oven. They have since become one of the highlights of British baking – no traditional English afternoon tea would be complete without warm scones with jam and clotted cream!

There is now a huge variety of scones, both sweet and savory, made with dried fruit, nuts, vegetables, cheese, chocolate chips – and even a recipe with lemonade! This is a recipe for a traditional English plain scone, but it can be modified with the addition of your favorite treats. 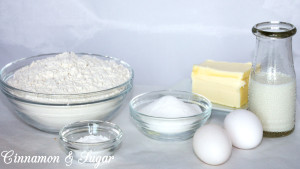 *”Double-acting” baking powder contains both cream of tartar and baking soda and causes the dough to rise only after heat is applied. If you use single-acting baking powder (which rises immediately), then you must not leave the dough to “rest” but must cut the scones and bake them immediately.

(from Cinnamon and Sugar and a Little Bit of Murder)

I have a scone recipe that comes out lovely and is so easy.
SWEET CREAM SCONES

Into food processor: 2 cps. flour, 2 Tbsps. sugar, 1 tsp. salt, 1 rounded Tbsp. baking powder
Fluff this up a bit and then add 3 to 4 Tbsps. cold butter cut up small.
Pour into processor, gradually, 1 cp. heavy cream and buzz 5 or 6 times or just until batter holds together.
Turn batter onto floured board or countertop and with floured hands pat into a circle about 6/8″ high.
Cut out scones with floured cutter or glass. For beautiful color fork-whip an egg and brush tops of scones.
Oven 425 degrees (American). Place scones about 1″ apart. Bake for 13 to 15 minutes (Depends on your
oven.)

Frankly, I haven’t tasted any better than this. I’ve been to England many times and have had tea in many places there. The first year I traveled there I was with a teachers’ bus tour. We stopped one day in a lovely town in the Cotswolds and a few of us had tea and scones in a little tea shop. For years I had tried to duplicate those light, fluffy, buttery scones and this recipe that I sent you is the closest to them that I’ve ever come across. They absolutely don’t need to be kneaded, and including eggs in the batter is not necessary. I try to handle them as little as possible. And I find that I often put only jam on them because the butter/cream ingredients already in them gives them a great flavor.

So, if you’re a scone lover, do give them a try. In the meantime, I’ll enjoy your enchanting books.
Regards, Ann

Am really enjoying the Oxford Tearoom Mysteries! When I read them I think of how much my late mother (also a writer) would have enjoyed them as well. Could you post the other recipes from the books here as well please? I have your books on Kindle so I can’t print paper copies of the recipes and I love to try new recipes and different versions of classics. btw My Grandmother was Scottish and she would die of shock at hearing anyone pronounce “Scone” with a long “o”. It’s always been rhymes with “gone” or else “done” to us. I used to think the other way was an American mispronunciation. Thank you and keep writing!

Thank you, Susan, for your kind words! Yes, I’ve been meaning to post the other recipes on the website too – it is definitely on my To Do list – but have just been so busy with writing the next book in the series. I will try and get them up ASAP and drop you a line when they’re here, so you can see them. Thanks for reminding me!

Oh – and I pronounce “scone” the way your Grandmother says too – but I have some British friends who insist it should be with a long “o” – while others vehemently disagree. It’s funny how worked up people can get about it!

Thanks again for taking the time to leave a comment!

Thanks so much for sharing my review, photos, and video of your Traditional English Scone recipe! I adored both your book and your recipe and am honored that you included me on your blog!

I haven’t read any of your books yet, but I am just about to begin your pre-fuel. I love that you are British, love scones and kitty kats

Thank you, Reiki, for your lovely comment! Sorry for my late response. I hope you enjoyed the prequel to my series – it’s always nice to meet a fellow cat lover! 🙂

I am an avid baker, (and mystery reader!) and host a “Cooking Club” in my home once a month. I am always looking for great recipes and food to share with my group. I just recently tried the Scone recipe in your book, (gorgeous recipe!) and was inspired to make home made strawberry jam to pair it with. I am not confident enough to try making “clotted cream” yet, but in time, I will give it a go! I did whip up some heavy whipping cream with a dash of home made vanilla in it to top the lovely scones and strawberry jam with, and it literally melted into my mouth! My picky teenager son even enjoyed them and had second servings! Thank you for such a lovely recipe and fun book! I have read all in your Oxford Tearoom mysteries and can’t wait to read the 6th book soon!

I’m so pleased to hear that the recipe worked great for you and that you enjoyed the scones. (Shhh – I have to tell you a secret: I personally prefer whipped cream to clotted cream, I think, and your version with vanilla sounds absolutely delicious!!!)

Thank you for the kind words about my books – I’m delighted that you’re enjoying the series so much!

I know that my question may be a faux pas, but I cannot eat regular flour, so could I make this with almond flour?

Oh, it’s not a faux pas at all! 🙂 It’s a perfectly reasonable question. I’m afraid I don’t know the answer – but I will ask a friend who is a brilliant baker to see what she thinks and let you know as soon as I can.
Thanks again for commenting!
Best wishes,
Hsin-Yi

Hi Rosanna, I’ve made this recipe several times but haven’t tried to substitute it with almond flour to make it gluten-free. I’m afraid that the texture wouldn’t turn out quite right due to the need to adjust the liquid ratio and the need to use xanthan gum. However, if you can find a cup-for-cup gluten-free flour substitution, it should work just fine without having to make any other adjustments. Depending on where you live there should be several brands you could try, such as King Arthur Flour, Bob’s Red Mill, or Krusteaz. I’ve used the King Arthur Measure-for-Measure Gluten-free flour in other recipes and no one can tell the difference. If you’re looking for a Paleo blend, King Arthur Flour also has a Paleo Baking Flour that works pretty well, although the texture isn’t quite as nice as their gluten-free blend. But at least I haven’t had to adjust the recipe’s liquid ratio or add xanthan gum. Hope this helps and happy baking!
Kim
Cinnamon & Sugar

Thank you, Kim! This absolutely helps!!!