The Mystery of Muesli's Missing Fangs... 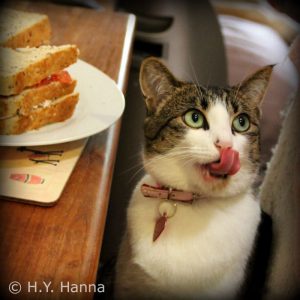 The real-life Muesli might be very different to the fictional version in my Oxford Tearoom Mysteries but the one thing they both share is a healthy appetite!

Muesli seems to spend most of her waking hours demanding her next meal, and so it was odd when we noticed in recent months that she was leaving large portions of food in her bowl untouched. In fact, she was eating so little that she was starting to lose weight, despite – like most cats! – spending most of her days sleeping.

So, after trying various things like changing her diet, her food bowl, the place and time she was fed (and checking that she wasn’t being fed alternative meals by a well-meaning neighbour!)… we finally took her to the vet. 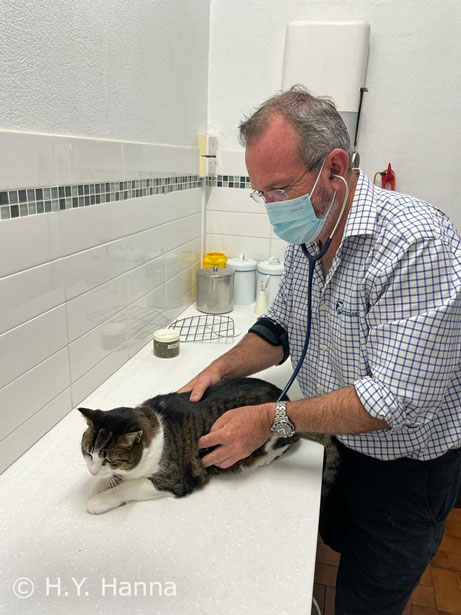 At first, it seemed a complete mystery as her general check-up was fine: there were no sinister lumps, no worrying blood test results, no unusual heart rhythms or any other sign of problems with vital organs. She was alert and playful, and she wasn’t sleeping any more than normal.

She just wasn’t eating much and was definitely losing weight. Then the vet took a closer look in her mouth and did some X-rays, and he found something interesting…

It turned out that Muesli had a condition called Feline Tooth Resorption, a horribly painful dental disease whereupon the cat’s own body starts breaking down and re-absorbing the structures that form a tooth. Eventually, the entire tooth disappears, leaving only a bump in the gumline.

The disease actually affects about 40% of cats and yet is often unrecognised by owners. This is partly because cats are adept at hiding pain – it’s a natural instinct that evolved in the wild, to prevent them showing weakness and being targeted by predators. (Apparently, most cats usually won’t cry out in pain until they’re seriously ill or dying!) 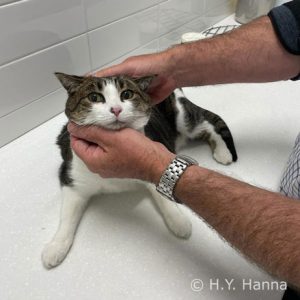 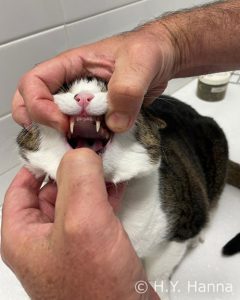 So the only way Muesli was showing her discomfort was by avoiding eating altogether. Actually, we had noticed her dropping food out of the side of her mouth (we just thought she was becoming a messy eater! 😝) and chewing quite slowly – but until the vet mentioned these as common symptoms of the condition, we hadn’t really given it much thought. She didn’t display any behavioural changes (like becoming less friendly or playful) or show bleeding in the mouth, which are also common with the disease. 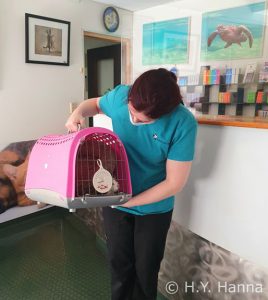 Luckily, our vet is quite experienced with the condition and diagnosed it immediately. He recommended that the affected teeth be extracted, which had to be done under general anaesthetic. So Muesli was duly booked in for a day surgery and delivered into the caring hands of one of the vet nurses…

The whole procedure went very smoothly – she didn’t even have to stay overnight at the vet clinic – although she did return home that evening very groggy!

The poor thing took quite a while to shake off the anaesthetic – she had weird “googly eyes” for hours and kept suddenly stopping and staring into space, as well as weaving drunkenly around the house… 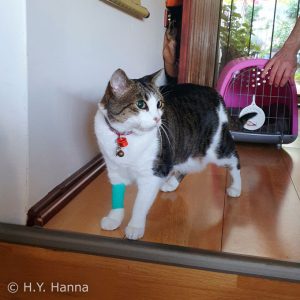 We tried to keep her indoors, but she kept asking to go out in the garden and became so distressed that we relented. We did accompany her out to supervise her for a bit but it seemed that all she wanted to do was head for her favourite hidey-hole under the giant Pennisetum fountain grass.

So we left her to sleep it off and I’m pleased to report that she strolled back into the house several hours later, looking much more like her normal self and loudly demanding her dinner! 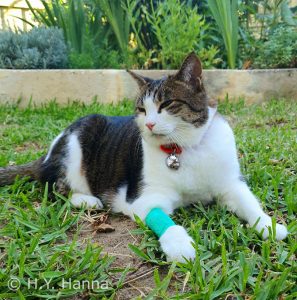 Muesli was kept on soft, wet food for a week (she normally eats a raw diet combined with grain-free dry cat food) – and then slowly transitioned back to her usual food. Thankfully, the whole procedure seems to have been a success: she’s back to eating her food with gusto, is not showing any signs of pain or discomfort anymore, and is licking her bowl clean at each meal!

Muesli is now 11 years old and the vet says her teeth are in very good condition for her age, due to her raw diet. So hopefully, as long as she doesn’t have more teeth affected by Feline Tooth Resorption (scientists & vets still haven’t been able to determine the cause of the disease, despite it being so common in cats), we won’t have any more “googly-eye” episodes! 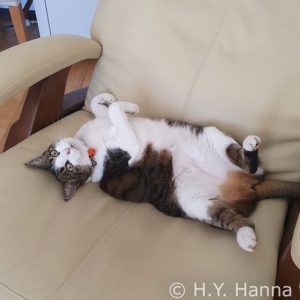 (* If you’d like to read more about Feline Tooth Resorption, you can find some info here: https://www.vet.cornell.edu/departments-centers-and-institutes/cornell-feline-health-center/health-information/feline-health-topics/tooth-resorption)

ps. By the way, fans of my Paws by the Beach series might enjoy knowing that our lovely vet, David, (seen in the photo with Muesli above) was my “professional consultant” on that series. He very kindly took the time to read all the scenes involving veterinary practice & procedures, to check that the details described were authentic & accurate (well, okay, maybe not the bit about the vet being a sexy beach hunk or the rescued koala joey wrapped in an Armani linen jacket… David said the reality of life in an animal hospital isn’t quite so glamorous! 😉 )

I have had cats my entire life and I have never heard of this condition. Sincere thanks for posting and sharing your story. I’m sure it will help many cat owners. I know I’ll be watching my cats more closely. I love your books.

Thanks, Kate – I’m glad you found the info interesting, although hopefully you’ll never have to use it for your own kitties! And thank you for your kind words about my books 🙂

Thank you so much for sharing this, H.Y. I am a life-long cat owner and I have never heard of this disease. I also love your books and so look forward to the next ones. Thank you for providing us with some fun cat respite during these crazy times.

Thank you for your kind words, Lisa, and I’m glad you enjoying the blog post!

I am so glad Muesli is doing better. My little dog also had a tooth extraction and took a bit of time getting over the anaethesia. Her loopy looks and loose tongue had us in stiches for a while! Poor babies!

Yes, I have to admit – we were giggling a bit at Muesli too! She did look so funny. Although she let us know later when she was back to her normal self that she was not impressed with our amusement at her expense – haha! 😉

So glad she is better and acting more like herself!

Oh my goodness! That must have been so worrisome trying to determine why the little minx wasn’t eating. Thank heavens you have an outstanding vet who diagnosed and quickly resolved the issue. Both Kitty and I are sending hugs and we’ll wishes from Florida, USA. And I’ll definitely be watching Kitty for signs of this condition! As you may recall, Kitty was my beloved Dad’s cat, and we only have a vague idea as to his age … likely 9 to 11 yrs old. But he still has a VERY healthy appetite! In fact, at his annual check-up last month, our vet said he might be getting a little chunky. Whoops, time to cut back on those evening treats…

Again, all our best and Kitty sends a happy “meow” to you and Museli! 😻

Thank you, Sharon! 🙂 Glad to hear that Kitty is still doing well and enjoying his food… even if he’s got to watch his waistline now – haha!

Hi H.Y.Hanna
I have two cats and one is black and white name of willow and a ginger one name of ozzy, both are boys ozzy is the oldest, at 11 years old and willow is about 6 years old. I’ve always been around cats and I owe my life to them as when I was 6 months old my parents had a cat and one night my mum was waiting for my dad to come home after work, mum had feed me just before the cat kept going from the front room were I was to the kitchen (drove mum crazy) until my dad walked through the front door, mum said that there was something wrong with the cat and she didn’t know what it was so dad said to the cat, what’s wrong and show me, they followed her into the front room and the cat jumped up on the side of my cot and pulled me back onto my back were mum and dad saw that I had been sick and the cat was trying to get mum to come and see. I was lying on my side and I kept rolling onto my face so my mouth and nose was blocked and she kept me safe. I couldn’t live without my boys now

Wow, what an amazing story, Pippa – it certainly does sound like you had a kitty guardian angel!

My oldest cat Tom had this, he actually only has 5 teeth now, he is 15 years old so has managed for quite a few years with so few teeth, he only has wet food so that helps as he can’t really chew on hard food. Glad you have a good vet who spotted the condition. Looking forward to your next book xx

Thanks for sharing, Joselyn! Good to hear that Tom is still doing well, despite having fewer teeth. 🙂

Thanks for sharing Muesli’s story. I have cats and hadn’t heard of this condition.

I am really pleased to hear you raw meat feed Muesli. I have 4 cats
( mother and 3 sons) all raw meat fed. Their coats are amazing for ” common moggies ” I am always being complimented on how sleek and glossy they are.

Just want to say you are a fantastic writer. You captured my attention immediate a wonder You surprised me with who was the killer. I love it and plan to read more. Love the cozy type mysteries. I’ve also enjoyed your blog and the remarks. I have an 11 year old dog with questionable background (mutt) who is a fantastic smart guy. I had cats when I was a kid a Maine coon cat who was huge and a big boy, he caught my parakeet and bit off his leg. He was the only ballhheaded parakeet I’d ever seen. I kept him in a canary. Cage and in the morning and he would escape by going out the wider spaced wires at the top. And he didn’t fare badly and got along great with one leg.i can not have cats and had to regime our ferret I’m allergic to both . I’m now77 and have always had animals in my life they do complete our existence. I’ve raised 8 baby coons ; rabbits wild and tame; 3 baby chipmunks that were so new they had no hair[ never do that i got so. crabby cause i had to eyedroppe feed them every 2hours all day and nigh!]and a lamb. In the kitchen no less all bottle or eyedropper fed..
I love your style and feel I would love to talk to you as a friend. Best of luck to you.
THANK YOU
Seka

Thank you for sharing, Seka – it sounds like your furry (and feathered) family members keep you busy! Thank you also for your kind words about my writing – I’m so pleased to hear that you’re enjoying my books! 🙂

I just read “Deadhead and Buried” and walked away feeling more hopeful about my own life, that anything is possible. I love this kind of rags to riches story, where a woman’s feelings of self-worth are re-energized.

Thank you, Falcon, for your lovely comment! I’m very honoured that my book has touched you and helped lift your spirits. 🙂 I love those kinds of uplifting stories too!