NEW RELEASE: Till Death Do Us Tart (Oxford Tearoom Mysteries #4)

I’m delighted to announce that Till Death Do Us Tart – Book 4 in the Oxford Tearoom Mysteries is out now! 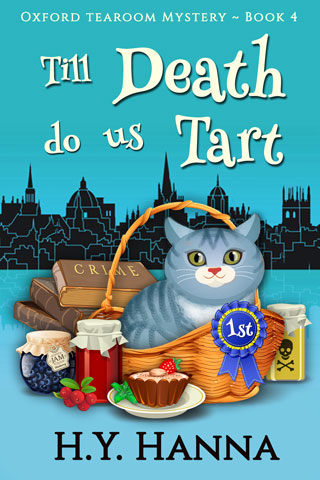 Till Death Do Us Tart
(Oxford Tearoom Mysteries ~ Book 4)

When Oxfordshire tearoom owner, Gemma Rose, enters her little tabby, Muesli, in the cat show at the local village fair, the last thing she expects is to stumble across a murder. And when her meddling mother and the nosy Old Biddies decide to start their own investigation, Gemma has no choice but to join in the sleuthing. She soon finds there’s something much more sinister sandwiched between the home-made Victoria sponge cakes and luscious jam tarts … But murder isn’t the only thing on Gemma’s mind: there’s her desperate house-hunting that’s going nowhere, the freaky kitchen explosions at her quaint English tearoom and an offer from her handsome detective boyfriend that she can’t refuse! With things about to reach boiling point, can Gemma solve the mystery before the killer strikes again?

** Traditional Victoria sponge cake recipe at the end of the story!

And for those who enjoy a little taster, here is an excerpt: