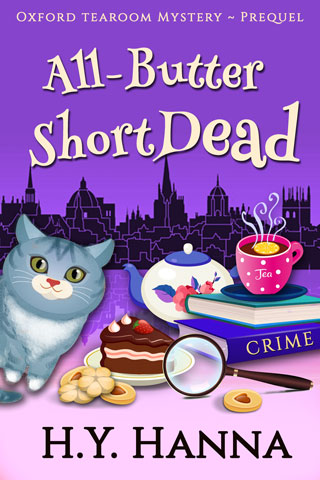 I’ve got a surprise for you! 🙂

It’s the prequel to the Oxford Tearoom Mysteries, called All-Butter ShortDead and it features the events before Book 1: A Scone To Die For. See how Gemma arrived back in England and found the tearoom, the first time she met Muesli, more shenanigans from the Old Biddies, and of course, there’s a delicious little murder mystery included for you to sink your teeth into! 🙂

It’s shorter than the usual books in the series and I hope you will enjoy it as a mini-treat!

Get your free copy!

I wanted to write this as a special gift to my loyal readers and subscribers – and I’ve managed to negotiate with the retailers to make it available FREE for a limited time!

Don’t worry – if you prefer to read a print copy, I haven’t forgotten you! (although unfortunately, these can’t be free)

Gemma ditches her high-flying job and returns to Oxford to follow her dream: opening a traditional English tearoom serving warm buttery scones with jam and clotted cream, and fragrant tea in pretty bone china… Only problem is–murder is the first thing on the menu and Gemma is the key suspect! And the only people Gemma can turn to for help are four nosy old ladies from her local Cotswolds village – not to mention a cheeky little tabby cat named Muesli.

Who is the mysterious woman Gemma met on the flight back from Australia and why was she murdered? Now Gemma must find the killer, solve the mystery and clear her name if she’s to have her cake–and serve it too.

This prequel to the OXFORD TEAROOM MYSTERIES includes chapters from A Scone To Die For (Book 1). It is shorter than the rest of the series – which are all full-length novels – and can be read as a standalone, before or after any other book in the series.

And for those who enjoy a little taster, here are the first 2 chapters:

I knew I should have listened when my mother said never talk to strangers.

The plane landed as smoothly as it had taken off—although it seemed to be just as much an ordeal for Jenn, despite the amount of “nerve-steadying alcohol” she had consumed. In fact, she gripped the armrests so tightly, I thought she would wrench them off the seat, and her face was so white when we finally touched down that I began seriously wondering if I should have followed the instructions on the Safety Sheet and stuck an oxygen mask over her head. She breathed a huge sigh of relief as the plane finally taxied to a stop and the seatbelt sign was switched off.

Grab your free copy and read the rest of the story:
Amazon | Amazon UK (also free in all other Amazon stores)
iBooks | NOOK | Google Play | Kobo

I hope you enjoy the prequel and I’d love to hear what you think! Please take a moment to leave a review on Amazon if you can – I would really, really appreciate it. Thank you!

Oh – and for all those who have emailed me to ask about Book 5 – don’t worry, that’s still on track for a September release. I’m hard at work on it as we speak! 😉

Previous Post
Q&A: “What was it like being at Oxford & did you like living in England?”
Read More
Next Post
Q&A: “Is Meadowford in the Oxford Tearoom Mysteries based on a real village?”
Read More
Subscribe
0 Comments
Inline Feedbacks
View all comments