Sign up for new book alerts and newsJoin My Newsletter

Behind-the-Scenes: The Making-Of "Four Puddings and a Funeral" Book Cover 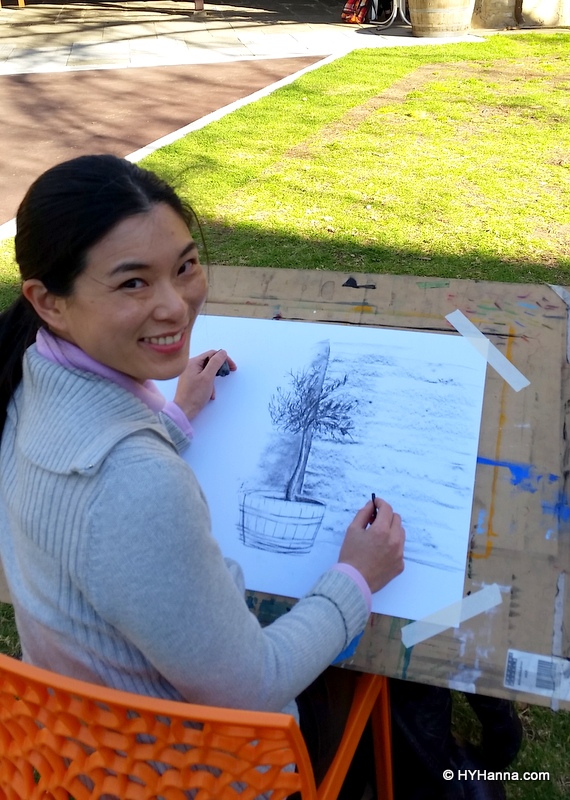 The 6th book in my Oxford Tearoom Mysteries, Four Puddings and a Funeral, is releasing at the end of this month and I’m really excited to share the cover with you, plus show you how it was created!

As some of you may know, I design my own covers and it is one of my favourite parts of the process (aside from writing the story). I’ve always done a lot of “art” ever since I was a child – like painting, drawing, sculpture, etc – so when I discovered Photoshop, it was like finding a wonderful new toy!

I’m completely self-taught (it’s amazing what you can learn on Youtube! 😉 ) and I found that I really enjoyed cover design – it came very naturally to me. My early books (the children’s mystery series) had covers created by a professional cover designer but I do all my own covers now… In fact, I’ve got so many ideas for covers that I can’t write the books fast enough – haha! 😉

The Oxford Tearoom Mysteries covers can be quite complex as there are so many components. They are not drawn from scratch but created by combining several pieces of vector graphics together (oh, except the cat – I did hand-paint part of that) and often, the hardest part is finding the images that look “right” together (as you’ll see in the video below, there is a lot of trial and error!) plus having all the colours harmonise, and the finished cover not look too “busy” with clashing colours.

Anyway, so rather than doing a traditional cover reveal, I thought you might enjoy a little “Behind-the-Scenes” sneak peek at the making of the new cover. The whole process took me about 2 days but I’ve condensed it & speeded it up into a 5 min “highlights” video for those interested in watching the process.

But first… here’s the finished product! What do you think? 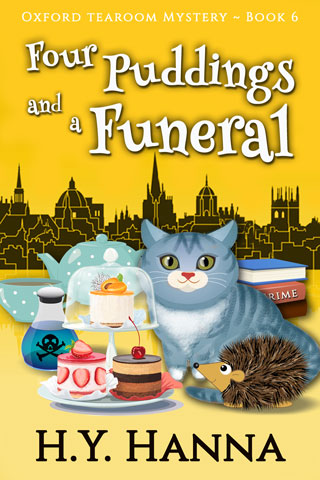 You’ll notice that Muesli has a little friend – yup, Four Puddings and a Funeral will feature a prickly guest star… a hedgehog! 🙂

When I first got the plot idea, I was worried that American readers might not be familiar with hedgehogs as I know they’re not native to the U.S. but my fans on Facebook assured me that hedgehogs were well-known and in fact, popular pets in the States (although it’s the the African pygmy variety, not the bigger European hedgehog found in Britain).

So… here is the video showing you how the magic happens! 😉

I hope you enjoyed that!

The book will be going to my editor early next week and everything is hopefully on track for release in the last week of March.

Make sure you’re signed up to my Readers’ Club Newsletter so you’ll be notified when it’s available (as well as get updates about exclusive giveaways, special offers and other book news!) You can sign up here: https://hyhanna.com/newsletter

(… and then after that, I’ll be diving straight into the next book of the BEWITCHED BY CHOCOLATE Mysteries – Book 3, which will probably be releasing end April / early May)

Thanks for sharing the new cover creation video. Looking forward to new books in both series. Like the hedgehog! -Sally Ann Sims, Author of Halt at X: A North of Boston Novel

Thank you, Sally Ann – I’m pleased you like the new cover!

As you know, I love your Oxford Tearoom series and think the covers are wonderful. I did not know that you did the cover design – wow – that’s one of my favorite parts of your books! I can’t wait to read the next books in both of your series, you cannot write fast enough for me (no pressure though!).

Thank you, Celia, for your kind words! I didn’t realise that the covers were one of your favourite parts – Oh, that’s a great compliment – thank you! 🙂

Oh my goodness, that is completely fascinating! Thanks for sharing a glimpse into your amazing talents with the process of creating your beautiful covers!

So pleased you enjoyed the video, Kim! Well, you know that’s how I feel about YOU when I see the amazing cakes and other creations you bake – haha! 😀 THAT looks like magic to me!!

Look forward to reading your new book. Can we pre-order Four Puddings and a Funeral.

Hi Renata – I’m afraid it’s not available for pre-order but don’t worry, if you’re on my Readers’ Club Newsletter, you’ll be notified as soon as it’s out! 🙂

Loved the video. I use Photoshop as well. Funny how different tools get us to the same outcome. 😉

Thanks! Yes, I’m still learning so many new things with Photoshop all the time – it’s great fun!

I love the new cover for the latest Oxford Tearoom Mystery book. And thank you for showing us how much effort goes into creating it.

Are those images created by you?

No, Barbara – the individual vector images are from a stock image library… well, except for the cat which is partly a stock image and partly hand-painted by me! 🙂

Love all your books and the video was great!

Thank you, Trish! 🙂 So pleased you enjoyed it!

How cool is that?! I never knew you made your own covers 😀 Makes me love your books even more!
Before I read the first Oxford Tearoom mystery, I saw its cover and thought to myself “I really, really wanna read this book – the cat is just too cute to ignore!”. And fortunately, the story itself was so good!
Keep up the good work – I can’t wait for the new book 🙂
Btw, I also love your Bewitched by Chocolate covers…well done!

Thank you, Myriam, for your comment! 🙂 And that’s lovely to hear about the covers enticing you to try the books – I’m so pleased!

Finally got round to watching the video… fascinating to see how it’s put together… kind of a more artistic version of a PowerPoint slide!! 🙂
Good work & thanks for sharing!